Denys Favre – President of the Trust 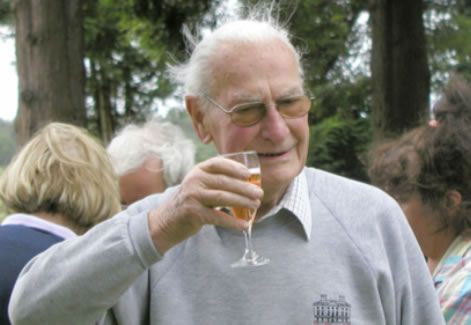 Our president – Denys Favre - died on the 27th October, a few days short of his102nd birthday.

It says something about Denys’ character that he lived so long. Conversations with him on the telephone in recent times were as sharp as ever. He was a great supporter of the local community. He was a mayor
of Epping and the President of the Epping Society. As such, he took part in numerous campaigns to protect the local environment. For example, he was involved in the saving of Hill Hall and the prevention of a corner of Copped Hall Park becoming a motorway intersection with the road to Epping.

I first met Denys in 1986 when Copped Hall was threatened with a large-scale development proposal that would have mutilated the mansion and brought massive daily traffic generation into the conservation area. A group of us set up a committee with Denys representing the Epping Society. Representatives of six other conservation societies completed the group.

As an alternative to development, we proposed a low-key community solution to the ruin of Copped Hall whereby the mansion and gardens would be carefully restored for educational, cultural and community benefit. Denys felt sure our proposals and lobbying contributed to the Council’s eventual rejection of the development proposals. In 1997 we set up the Friends of Copped Hall with Lady Gibberd as chairman and Denys as vice chairman. Our objectives gradually gained support both locally and nationally. In 1992 the third developer to propose a large-scale development went into liquidation and we were offered Copped Hall by the developer’s bank in 1992. Denys was one of the very few people who supported the idea of the Friends trying to purchase Copped Hall. To most the idea seemed mad - as we actually had no money and Copped Hall was a very large ruin full of trees and very nasty vandals!

We set up a charitable trust with Denys as one of the trustees. Denys supported the idea of borrowing quite a large sum of money to purchase Copped Hall and was optimistic about us eventually paying off the loans. Denys became the treasurer and kept a very tight control over finances. Later, when he became chairman of the trust, he made sure that the original objectives that were fought for so hard during the campaign were upheld. A key point about Denys is that although he was very much a solid citizen he was also quite adventurous. Denys was always positive and a great supporter of the volunteers. If one was to try and sum up Denys’ many qualities, the following adjectives come to mind - wise, calm, determined, fearless, dignified and young at heart. A truly excellent gentleman who will be long remembered. Alan Cox