In 1739 Edward Conyers purchased the Elizabethan Copped Hall from Sir Thomas Webster who had owned it since 1701. Edward Conyers only enjoyed the house for three years before dying in 1742.
Edward Conyers son, John, inherited the property and considered repairing it as it had become dilapidated.

Two excellent paintings were painted by George Lambert showing the house in its landscape. These paintings are now in the Tate Britain. John Conyers brother-in-law, Sir Roger Newdigate, carried out extensive measured drawings.

However, John Conyers moved in cultural circles and wanted to express the latest architectural ideas of the day which were incompatable with living in the old house. Plans for a PalIadian mansion were drawn up by his architect - John Sanderson. Assisting with these ideas were Sir Roger Newdigate and another architect – Thomas Prowse. Very grand proposals were produced comprising a main block with a vast dome, a portico and attached curved colonnades leading to symmetrical pavilions. In the end only the main block was built - on a different site to the Elizabethan mansion. It was completed by 1758. Fragments of the Elizabethan house were retained and a rock garden was created in part of the cellars.

The new mansion was superbly sited overlooking two valleys with a third valley to the north. The building is very well proportioned on all fronts. The chimneys are successfully positioned in a tight geometric arrangement. It was a perfect example of the '18th century house in landscape'.

Internally there was a particularly good arrangement consisting of two top-lit stairwells surrounded by a circuit of inter-connecting grand rooms at first floor level. At second floor level there is an excellent concept of circulation spaces at the top of the staircases with four sets of triple arches in line. In the basement are superb brick vaulted ceilings.
The choice of a different site for the Georgian mansion resulted in a very interesting garden arrangement as the gardens of the new house did not interfere with the garden ground levels of the Elizabethan house - which were initially largely left intact. A magnificent 4 acre walled garden was built to grow fruit, flowers and vegetables.
In 1775 John Conyers died and his son, John, commissioned the architect James Wyatt to make internal changes to the mansion. These changes did not improve the architecture and largely comprised of sub-dividing the rooms. James Wyatt did, however, design the southern gate-houses and entrance screen which are very satisfactory. 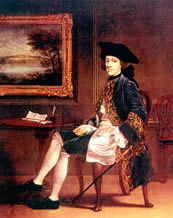